Tamagawa (玉川) is a student of St. Tachikawa Girls School who takes pride in her ability to cut meat and prepare steak.

Tamagawa has neck-length blue hair, blue eyes, a mole under her left eye and she wears red framed glasses.

She wears an apron over her clothes.

Like most of the students of St. Tachikawa, Tamagawa is needlessly extravagant and overly emotional. However, she is more levelheaded than her peers, as upon learning of Takafudou's intent of playing dirty she quickly criticized her and agreed with Kenji on her underhanded moves, as he was surprised a student of their school was being reasonable for once. She is shown to be respectful to her father, seeking to honor his teachings by using his recipe in her meat dishes and sell them to the public. She was very happy when she heard that word will get out about the dishes.

As Takafudou is introducing the second challenge, Tamagawa suddenly appears and reveals she shall be their next opponent. They're challenged to run a stand with the victor decided by who brings in the most customers. However, when learning from Kenji that Takafudou didn't tell them of this and had the challenge set anyway. Tamagawa is appalled and quickly criticized her friend by agreeing with Kenji on her underhanded moves. Kenji was surprised a student of their school was being reasonable for once. When Takafudou explained her reasons and the rules of the challenge, Tamagawa pleaded with Kenji to accept since her father's reputation was vital to her. Begrudgingly, Kenji agreed and her stand sells fine steaks, while Kazama and co. are made to sell water Sakura had collected from various sources from around the world. Tamagawa lost as it's considered unsightly for a student St. Tachikawa to "wolf down meat", limiting her customers.

Sean Connery (Konekone) praises her on her steak as the Kazama and co. contemplate their next move. Sean Connery (Konekone) offers them some of Tamagawa's steak and offers to cut it for Kenji. This gives Kenji the idea of breaking their stamp card into pieces to split up the necessary work. When Takafudou expressed annoyance at Kenji nearly giving up, Tamagawa once more criticized her underhanded moves and Takafudou told her to keep quiet.

After the rematch ends, Kazama and co. go to Yakiniku Daily Special's family restaurant where they're disappointed to find only meat and salad for sale. This upsets Yakiniku, who upon seeing Tamagawa's cut quality at only 500 yen finds himself demoralized.

As events unfold, Noe accidentally lets slip that Roka, Tsutsuji and Takao have all been staying with them which prompts Takafudou, in the next room, where various St. Tachikawa students can be seen having a "modest wrap-up party". Among them is Tamagawa. 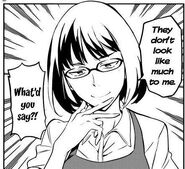 Tamagawa on the cover of volume 12
Add a photo to this gallery
Retrieved from "https://d-frag.fandom.com/wiki/Tamagawa?oldid=7664"
Community content is available under CC-BY-SA unless otherwise noted.