Takao (高尾) is a second year student at Fujou High and the current president of the Real Game Creation Club.

Takao is a fair-skinned girl with waist-length thick light brown hair that is tied into a braid (Like most anime characters, Takao has bangs and locks of hair framing her face) with bangs parted in the middle, brown eyes and a red headband. One of her most notable features is her extremely large bust size, which gives her difficulty in closing her tracksuit's zipper whenever she wears it and they bounce a lot due to their size.

Takao inherited her mother's figure and large chest, while her eldest sister and her second sister are both flat-chested.

Takao is a simple, proud and sometimes, dense girl who can be very stubborn, as she really hates to lose and quickly holds grudges against anybody for any number of reasons. She is also intimidated quite easily despite her tough attitude, and is prone to cry at any moment. However, deep down, she is actually a very sweet and kind girl. Takao cares very deeply for her friends, and she is always willing to help and support them. Despite her usually tough attitude, she is actually quite competent and a good leader; leading the real Game Creation Club away from the brink of disbandment and even winning awards for their games. However, her interactions with the Fake Game Creation Club often makes her flustered, frustrated or embarrassed. She is ordinarily one of the more levelheaded characters in strange situations, usually retorting other people's behavior. However, she also can quickly get caught up in the moment and act just as wild.

She has had romantic feelings for Kenji Kazama ever since he helped her reconcile with Roka Shibasaki. Despite her usual attitude, Takao deeply admires his kindness and willingness to help others. As a result, she continuously tries to spend time with him, even to the point of neglecting her club duties sometimes. Although very shy about her feelings, she has made numerous coy advances towards him. However, her effort often goes unnoticed due to his denseness. Nevertheless, she continues to care about him and frequently tries to support him. She can also get quite jealous of his relationship with multiple girls, making her more competitive for his attention.

Takao is also a very avid gamer; her main hobby is playing them, even pulling all nighters despite her sisters' annoyance. Anything related to games, she becomes super excited and passionate, even willing to wait in line really early to buy her favorite ones. She is also very adept at developing fun and unique games from different genres. As mentioned before, she is the current Game Creation Club president and won awards for their achievements. Even the Fake Game Creation Club has asked her to help create one for them, much to her dismay.

Takao was part of the original Game Creation club, along with Roka Shibasaki until Roka quit, accepting responsibility for the incident that caused the other club members to quit. This left the club on the brink of destruction, forcing Takao to find new club members. Eventually, she would meet and recruit the current members. Together, they would rebuild the club, even winning an award for their game. However, when Takao tried to invite Roka back to the club, she declined as she also created her own Game Creation Club. This act would cause Takao to feel betrayed and develop a grudge against the club. Since then, she has actively tried to disband the club to bring Roka back until the start of the series.

Takao lives with an unnamed father, her mother and her two siblings; an eldest sister and a middle sister.

After her attempts to have the Game Creation Club (Temp) shut down or absorbed into her own club fails, she begins to regularly hang around their club to the point that her own club members rarely see her.

Just like other characters' in D-Frag, their surnames are reference to railway stations in Japan as Takao is derived from Takao Station (Tokyo). 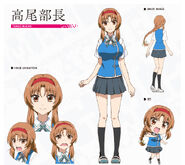 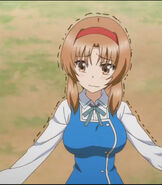 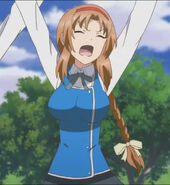 Vol 15 face cover appearance
Add a photo to this gallery

Interior cover, cover at the end of the chapter and alternative covers 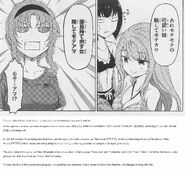 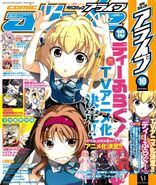 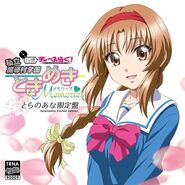 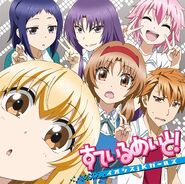 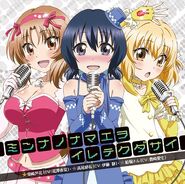 Minna no Namae wo Irete Kudasai! 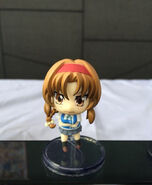 Add a photo to this gallery
Retrieved from "https://d-frag.fandom.com/wiki/Takao?oldid=7955"
Community content is available under CC-BY-SA unless otherwise noted.