"I forgot my water bottle! Wait here, I'll be right back!"

Sakura Mizukami (水上 桜 Mizukami Sakura) is one of the main characters in D-Frag! She is in her first year at Fujou High and is a member of the Game Creation Club (Temp).

She later starts referring Kenji Kazama as her big brother while Noe Kazama as her little sister, despite the denial from both. Her element type is "Water" and she carries around a water bottle at all times. Her combat method includes pouring water on her hands or forcing water down an opponent's throat.

Sakura has messy pink hair, magenta eyes, a slender build and she is almost always smiling, even when it may not be appropriate.

Sakura is a mostly laid back individual, is shown to be athletic and quite skilled at most things she attempts.

Sakura has an unhealthy obsession with water, she fights in a mostly normal manner but she douses her hands in water in between blows. She supposedly does this because she doesn't like touching people she dislikes. She also splashes water on people offensively. Like the rest of her club, she's stupidly strong.

Sakura joined the Game Creation Club (temp.) through unknown means, though it's implied that she, like Kenji, was forced to join against her will. She fits in well, though, and seems happy to be in the club.

When the Kazama Party first encountered the Game Creation Club (temp.), Sakura is the one who takes out Nagayama, while Oosawa takes out Yokoshima. While in the anime she waterboards Nagayama, in the manga she slams a bucket of water over his head. When Kenji attempts an escape, She gives chase, predicting he was going to run. Kenji comments on her speed, surprised she caught up with him.

Later, Sakura finds herself alone in the club room with Kenji, where she challenges him in a fighting game. She initially loses, though it is revealed she was sandbagging. Sakura criticizes Kenji on his weak resolve, claiming she hates him for not chasing his dream. This leads Kenji to drop out of the club, which sets off the encounter with the Band of 14 Devils. During the rescue operation, Sakura knocks out one opponent, then demoralizes the other two. She comments on how she doesn't like to touch people she dislikes which reveals to Kenji she was lying about hating him.

When Noe first checks out the Game Creation Club (temp.), she becomes upset that they assumed she was related to Kenji based purely off her hair. Noe points to Sakura's messy hair, only to find Sakura neatly brushing it and saying she wouldn't mind being related to Kenji. This disturbs Noe.

Sakura then drags Kenji and Noe to a water shrine with the intention of making them allies. She reveals that Roka and Chitose are rivals this time, though the presence of Takao's mom causes them to set their differences aside and team up against her. When they attempt to cross a gorge, Kenji nearly doesn't make it so Sakura attempts to save him. This causes her to nearly fall instead, but she's saved at the last second by Shaun Konekone. Their rival shifts to Noe, but with Takao's mom out of the running Roka and Chitose end up beating all of them. Shaun Konekone reveals the entire spring was a lie, the shock of this news causes Sakura to faint. Noe consoles her, and they get into an argument over whether drinking water or milk after ice cream is better.

During the rematch with the ex-student council, Sakura takes on Matsubara and manages to narrowly win. Sakura reveals she knew Matsubara was holding back. She manages to incapacitate Naganuma with only her voice, exploiting his love for anime as her voice is similar to an anime voice actress. Roka ultimately defeats him.

During the visit to the Kazama house, Sakura introduces herself to Kazamama as Kenji's younger sister. Kazamama states she doesn't remember having a pink haired daughter. When Kazamama attempts to invite Kenji's childhood friend Mogusa over, Sakura helps with the ambush.

While preparing for the game tournament, Sakura helps Chitose kidnap Funabori, as they were tasked with getting snacks. Their reasoning is that Funabori knows how to cook well. When Roka becomes depressed after the game console breaks, Sakura helps with trying to get Roka's spirits back up with a game of shogi. Their ridiculous interpretation of the rules is successful in cheering Roka up.

Sakura calls Kenji her "onii-chan", her older brother. Kenji and Noe Kazama dislike this, although Sakura is determined and doesn't pay attention to personal boundaries. They're on normal terms as friends, despite being one of the people who forced him into the club.

Sakura gets along well with her club members, though like the rest of them she isn't fond of Shiou due to his lovesick behavior towards Roka Shibasaki, their president.

Sakura considers Noe her rival in being Kenji's younger sister, despite the latter finding that disturbing. 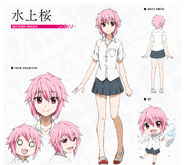 Anime Character Art
Add a photo to this gallery
Retrieved from "https://d-frag.fandom.com/wiki/Sakura_Mizukami?oldid=7659"
Community content is available under CC-BY-SA unless otherwise noted.