Roka Shibasaki (柴崎 芦花 Shibasaki Roka) is a second year student at Fujou High, the President of the Fake Game Creation (Temp), the older sister of Tsutsuji Shibasaki and the childhood friend of Chitose Karasuyama.

In addition, despite having a small profile, she is referred to as the strongest person in the entire school, her epithet is "Ultimate Darkness". Roka refers to herself as the "Fire" type for using moe attacks and try to be cute, which false on Kenji Kazama multiple times, but later states that her true element is actually "Darkness" type where she bag people head, leaving nothing but darkness in their vision.

Roka is a girl who lives in her own little world, almost uncaring about how strange her actions might seem to anyone else aside from her friends. She is also quite random, as the things she does and says tend to have no relation and relevance with anything in regards to common sense.

She is very caring for her friends, despite her personality towards most other people. She is brave and bold when it comes to her friends, willing to put herself and what she loves on the line for people close to her.

She can be described as a yandere of sorts, though she is a wild card at every other time of the day. It is hinted that she may have feelings for Kenji Kazama, and is shown to be jealous when other girls interact with him, evidenced by her and Takao that she refers to him as her "Important Person".

A year before the anime took place, Roka was part of the Real Game Creation Club, and she would wear a bag over her head while sitting in the club room. However, doing this made her quite stand out in a strange way, so most of the club members treated her very coldly and indifferently. The members that treated her that way were punished by Chitose Karasuyama (Roka's long time best friend), which caused most of the members in the club to drop out. Believing herself to be the root of the incident, Roka also decided to quit the club. While sitting on a bench outside of class, she was approached by Chitose who asked her if she wanted to make her own Game Creation Club and she gladly accepted by nodding her head.

There is a rivalry of sorts between Roka, Chitose and Tama Sakai which started when both Roka and Chitose were 4 years old and Tama was 5 years old. According to Chitose, the only reason Chitose became Student Council President is because Tama did.

Sometime in the past, she ended the battle with the current student body president and the one before her. She also acquired Ultimate Darkness Roka as her title. She is said to be the Underground Boss of Fujou High, though she says that she doesn't care about that title.

She became friends Chitose Karasuyama when they were both 4 years old.

Just like other characters' in D-Frag!, their names are reference to railway stations in Japan and Roka's name is derived from Shibasaki Station (柴崎駅 Shibasaki-eki) and Roka-kōen Station (芦花公園駅 Roka-kōen-eki). 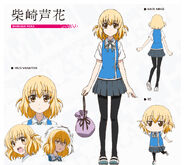 Anime Character Art
Add a photo to this gallery
Retrieved from "https://d-frag.fandom.com/wiki/Roka_Shibasaki?oldid=7656"
Community content is available under CC-BY-SA unless otherwise noted.