Noe Kazama (風間 之江 Kazama Noe) is the daughter of Kenichi Kazama and Saku Kazama and the younger sister of Kenji Kazama who is a first year at Fujou High.

Noe starts to develops a deep fear of Takao, partly due to Takao claiming that she ordered Kenji Kazama to stand in line for a game release in her stead - to which he complied (Noe being aware that her brother is a delinquent). Takao claims this in order to avoid a misunderstanding with Roka Shibasaki (which fails miserably). Takao continues to deepen this fear unintentionally through various misunderstandings.

Noe's element type was ice because the members of the Game Creation Club (Temp) asked her what her favorite thing was and she told them that it was is ice cream. However, at Hashimoto's island, by helping to carry Kenji because of his motion sickness, she became known as a "little sister element," which gets a more enthusiastic reception.

Noe is, in most aspects, considerably normal. She respects her brother Kenji's decision to be a delinquent to a clear degree, showing how much she actually does support him.

Out of all the members in her family, Noe appears to be the most level headed. Not being a delinquent, and actually being more on the soft side of things. She is very shy and polite, and can get spooked very easily. She doesn't talk much outside of home, and when she does, it is particularly to herself. However, she has been shown on numerous occasions to have a mental breaking point. If she feels as though she is dealing with people who are either annoying, or simply overload her, she almost always has an outburst.

Noe is a stubborn girl with a sense of rationale and common sense. Something valuable and rare in this series. She retains a lot of normalcy in her daily life, and is what most likely leads to her calm personality as a result. However, she has developed a complex on her spiky and stiff hair, and is very self-conscious about it to an extreme level. She finds being patted on the hair, or even a mentioning of her hair uncomfortable. Repeated attempts of doing so led to her first comedic outburst.

She holds a lot of affection for her older brother, though she doesn't show it in her normal routine. However, in specific situations, and when conditions are met, she will turn to her older brother to seek comfort. She uses the term "Onii-chan" instead of "Aniki" to refer to Kenji in almost every case. The former phrase being a much more affectionate and intimate way to refer to an older brother and the latter being more respectful and polite but somewhat distant. Usually, the situations in which she cries and seeks out her brother's comfort involve having gone through a severe amount of physical stress, as seen in her first appearance in Episode 09, or psychological stress, as seen (also) in Episode 09. 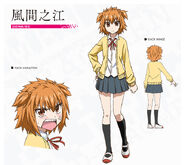 Retrieved from "https://d-frag.fandom.com/wiki/Noe_Kazama?oldid=7525"
Community content is available under CC-BY-SA unless otherwise noted.