Minami Ōsawa (大沢 南 Ōsawa Minami, alt. Minami Ohsawa) is a teacher at Fujou High and the Adviser of the Game Creation Club (Temp). Kenji Kazama mistook her for a student because of her young and small appearance. at this point in the series she has been degraded to a npc her last major role in the manga was in volume 7 when she went to Kenji house to take a shower which caused Chitose Karasuyama and Roka Shibasaki too head over to Kazama house thus setting in motion the events of volume 7

Minami is known well for her ignorance for about almost anything that the students do daily at the school. She is well known by the club members as a heavy sleeper and does minimal efforts in the club such as for keeping the club alive as an adviser or helping the club to win occasionally. Even as ignorant as she is, she ignore the students within reasons as this is shown when she misunderstood Ataru Kawahara abusing Takao when the real reason is purely was that he was untying her (Episode 4: The Tale of Massochist Hero - Ataru) and decided to knock Ataru out with her taser or so called 'Lightning Type' attack.

Sometime ago in the past she became the adviser of the Game Creation Club (Temp) because she wanted to catch up on some Z's (sleep). The manga revealed that her jersey is a memento from Noborito, a past student that graduated and she keeps wearing that as a memento.

Just like other characters' in D-Frag their names are reference to railway stations in Japan, her name is derived from Minami-Ōsawa Station. 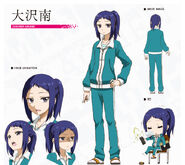 Anime Character Art
Add a photo to this gallery
Retrieved from "https://d-frag.fandom.com/wiki/Minami_Ōsawa?oldid=7627"
Community content is available under CC-BY-SA unless otherwise noted.