Kenji Kazama is a second year at Fujou High who is also an 'infamous' delinquent at the same school. He has his own gang that is called Kazama Party and unlike the other members of his gang, he possesses no special or remarkable traits other than his hard spiky hair and his straight man ability. The goal of his gang is to rule the school someday with his fists or rather their fists. In addition, he is a member of Game Creation Club (Temp) which he was forced into joining by its members.

Kenji is also a member of the Game Creation Club (Temp), after he was forced into joining it by the other four original members which include Chitose Karasuyama, Sakura Mizukami, Roka Shibasaki and Minami Oosawa. Later, the club members refer to him as the "Wind" elemental, due to his name. Kenji is also the older brother of Noe Kazama.

Despite being a delinquent, Kenji has a surprisingly kind and honorable side. He is always willing to help anyone in need because of a promise he made as a child with Shaun Konekone. An example of this is seen when he helps save Takao who was attacked by 50/50 Fujisaki (who had perverted intentions) during the preliminaries of the fight for Roka's pouch. However, most of the time, his personality can be very rough and loud. As a result, along with his appearance and gang reputation, the other students are still afraid of him. He has a strong desire to be the strongest at the school, but is hindered by the fact that most of the girls in the school are stronger than him. He usually plays the straight man to many of the club's situations, often commenting on the fact that most of the members are weirdos.

Despite his deliquent personality, he still manages to attract some girls' attention such as Roka Shibasaki, Funabori, and Takao. In addition, Kazama is quite competitive as he is willing to accept any challenges just to prove that he is better than his opponents. An example of this is when he tried to beat Roka Shibasaki at games rather than physical strength because of his rule to not hit girls, just so that he can be number 1 in the school.

Kenji, Ataru Kawahara, Yokoshima and Hiroshi Nagayama have been friends since Fujou academy. It is unknown if they have known each other before that.

In the past, the Kazama Party was at the top department store's roof when a fire suddenly started downstairs. Shaun Konekone suddenly appeared with a rope which allowed them to climb safely down from the roof thus saving their lives. However, Kazama was not pleased because he didn't want to owe this 'old fart' his life. So Shaun told him that he could pay off his debt to him if he promises to help anyone he sees in the need of help, to help them just as he did for him.

Upon entering Fujou High, Kazama, Yokoshima and Nagayama became delinquents, while Ataru joined the student council as vice-president. However, despite their positions, they still remain close friends. Kazama would later be forced to join the Game Creation Club (Temp), marking the beginning of the series.

One day, the Kazama Party noticed a fire coming from a club room and they immediately helped the occupants inside. After a series of events, Kenji finds himself becoming part of the Game Club, which is feeled with eccentric characters.

Kenji's daily basis is dealing with the bizarre antics of his clubmates. He also finds himself known as the lackey of Chitose, due to his partial role in taking down a notorious school gang. 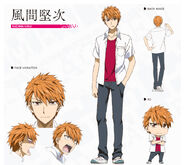 Retrieved from "https://d-frag.fandom.com/wiki/Kenji_Kazama?oldid=7624"
Community content is available under CC-BY-SA unless otherwise noted.