He is a second year at Fujou High. He is also part of the Kazama's Party, a delinquent group leader by Kenji Kazama who plans to rule the world someday with his fists. He is friends with Kenji Kazama, Ataru Kawahara and Yokoshima.

He acts as though he is a cool guy probably even since he was younger as seen in the flashback of episode 1. He acts or behave like a delinquent but seems to always do the right thing.

Sometime in the past he gained the name "Long Mountain Nagayama" for himself.

He, Ataru Kawahara, Yokoshima and Kenji Kazama have been friends since Fujou academy. It is unknown if they have known each other before that. 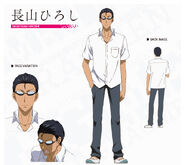 Anime Character Art
Add a photo to this gallery
Retrieved from "https://d-frag.fandom.com/wiki/Hiroshi_Nagayama?oldid=7623"
Community content is available under CC-BY-SA unless otherwise noted.