Hachi Shiō (子王 八, Shiō Hachi) is a second year student at Fujou High who is also a member of the Game Creation Club (Temp), but he was studying at his father's company for a while and took off from school and he's back. His parents run the Shiou Group, which manages various businesses. Due to his looks, personality and family background this causes him to be quite popular at school especially with the ladies. It is said that with a single smile he can steal any girl's heart, but Roka Shibasaki isn't the least bit into him which made him quite lovesick for her. It also turns him on when Roka is mean towards him and when she plays hard to get.

Despite being lovesick for Roka Shibasaki and always chasing her around he's a very polite young man who is very respectful and thankful to other students for their kindness towards him. In addition, he sees Kenji Kazama as a love rival because Roka sees him as a very important person.

Despite his view of Kenji as a rival, he also seems to see the latter as a friend often hanging out with the Kazama Party.

Hachi had known Roka Shibasaki ever since he was in his first year of school. He met her shortly after he entered the school while walking in the court yard, when he saw her it was love at first sight but his heart was captured after she (bagged him) place a bag over his head and walked away. He still carries the remains of that bag today, but its so torn up that you can't even tell what it is anymore. 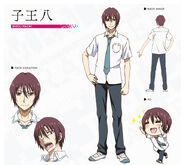 Anime Character Art
Add a photo to this gallery
Retrieved from "https://d-frag.fandom.com/wiki/Hachi_Shiō?oldid=7672"
Community content is available under CC-BY-SA unless otherwise noted.