According to Chitose Karasuyama's guide book, Funabori is a nice, kind domestic and considerate person that leads to most of the guys in school to love and adore her. 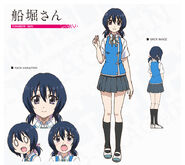 Anime Character Art
Add a photo to this gallery
Retrieved from "https://d-frag.fandom.com/wiki/Funabori?oldid=7519"
Community content is available under CC-BY-SA unless otherwise noted.