Chitose Karasuyama (烏山 千歳 Karasuyama Chitose) is a second-year, the 15th President of the student council whose authority is so great even the teachers fear her, the best friend of Roka Shibasaki, the younger sister of Chitose's Older Sister and the rival of Tama Sakai.

According to Ataru Kawahara, Chitose is literally the Queen of the school because both teachers and students bow down to her and Ataru also mentioned that Chitose caused gangs to go into hiding. Chitose is also the co-founder of the Game Creation Club (Temp) alongside with Roka. Chitose's element is "Earth", and her main combat method includes punching her opponents with sand on her fist from making sand castles, throwing lumps of dirt kept in her pockets at them, or digging pitfall traps. Chitose has a habit of burying her victims up to the neck.

Chitose has been shown to be a quite mean girl at times who abuses her position as student body president for her own gain, threatening people and using blackmail, but she shows a kinder side towards Roka Shibasaki since she was the first friend Chitose ever made and taught her to be brave. Chitose is shown to be on good terms with other members of the Game Creation Club (temp.), though it takes a while for her to warm up to Kenji Kazama, originally spreading rumors that he has foot fetish for having touched her foot (she kicked him). Even though she treat him badly, Chitose acknowledges Kenji enough to try to help him when he is in a (princess) pinch.

Chitose wasn't always mean and bossy. When she was young, Chitose was quite timid and shy. Kenji couldn't believe Chitose was like that and thought Roka must've been making it up. Chitose didn't have any friends since she spend most of her time playing in the sandbox trying to make the ultimate sand castle and was considered a crybaby. Her older sister tried to "buy" her some friends with candy, first Tama Sakai and then Roka.

When Chitose was young, she would spend all her days playing in the sandbox alone, which worried her older sister as she feared that Chitose wouldn't make any friends. Chitose's older sister hired a younger Tama Sakai to be friends with Chitose which backfired after she broke Chitose's sandcastle. Tama was not interested in becoming friend with Chitose since Tama had lots of friends. When all hope seem lost, a younger Roka Shibasaki appeared and wanted to play in the sandbox, but instead of playing with Chitose, Roka ended up playing by herself by digging a hole and sticking her head in it. When Chitose's sister begged Chitose to stop playing in the sand and make friends, Chitose revealed that the reason she was playing in the sand so she could make the ultimate sand castle for her older sister, surprising her sister since she thought the reason Chitose didn't play with anyone because she was either shy or physically sick like her. Chitose's sister came to terms with Chitose, and Tama continued to harass Chitose.

Soon Chitose and Tama became rivals to one another lasting through to the modern day, leading to Chitose becoming the person she is today. In the past she and the previous student body president (Tama) had a battle and Roka had to end it. The details of this encounter are unknown.

Back when Roka was still in the Real Game Creation Club, she was shunned by most of the club members due to her strange personality. This angered Chitose and caused her to punish them by burying them up to their necks, causing all of them to drop out of the club. Roka believed she was the reason the club was ruined and decided to drop out as well. While sitting on a bench outside Chitose approached her and asked if she wanted to make her own game creation club which Roka agreed to. This led to the creation of the Game Creation Club (temp.), and a newfound rival in the previously friendly Takao.

Later, in their second year, the Game Creation Club (temp) was facing a shortage of members and they had to try to recruit a new member to avoid liquidation. This eventually led to Kenji Kazama joining their club, but not without putting up a resistance. After he joined, she tried to drop a locker on him and got him suspended for a week.

Kenji would go on to start a competition between the real and fake Game Creation Club, which angered Chitose. She believed the only way they could win was by playing dirty and suggested they literally brick their PC's, that is fill them with dirt. While Kenji objected as the only voice of reason, he did get the idea to use Chitose's position as Student Council President to bend the rules. With this new battle plan they would go on to take a victory. Takao wasn't willing to give them their questionably earned prize, and in the struggle Chitose, Roka and Sakura ended up falling in pitfalls Chitose had dug for use on Takao. Takao's figure made these ineffective.

Just like other characters' in D-Frag their names are reference to railway stations in Japan, her name is derived from Chitose-Karasuyama Station (千歳烏山駅 Chitose-karasuyama-eki). 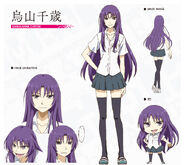