Ataru Kawahara (河原 中 Kawahara Ataru) is a second year at Fujou High and the Vice President of the Student council that is led by Chitose Karasuyama who he sees as an eternal rival in every way. According to Kawahara, whenever there was a problem Chitose would stomp and walk all over him. He is friends with Kenji Kazama, Hiroshi Nagayama and Yokoshima and he is also the Chief of Operations for the Kazama Party.

Kawahara is a perverted masochist that is addicted to abuse from girls such as Chitose Karasuyama. According to Kenji Kazama in episode 1, he is Kenj's only friend who has changed as he became a masochist.

Apparently, Kawahara doesn't like being called Vice President and wants his friends to call him "Acchan". In addition, he claims that he is the only one that haven't become a delinquent.

Kawahara lost the Student Body election to become president, so he decided to become vice-president instead so that he could help his old school in some way.

He, Hiroshi Nagayama, Yokoshima and Kenji Kazama have been friends since Fujou academy, but it is unknown if they have known each other before that.

In the past, the Kazama Party was at the top department store's roof when a fire suddenly started downstairs. Shaun Konekone suddenly appeared with a rope which allowed them to climb safely down from the roof thus saving their lives. in volume 9 it is revealed in a sort of flashback from the two students who encountered Kenji Kazama in volume 1 chapter 1 that he has his own little gang of masochists whom assist him in getting information from his rivals mainly the gangs in Fujouh High and his main rival 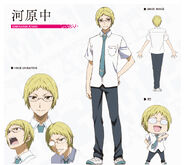 Anime Character Art
Add a photo to this gallery
Retrieved from "https://d-frag.fandom.com/wiki/Ataru_Kawahara?oldid=7615"
Community content is available under CC-BY-SA unless otherwise noted.